What’s on in Edinburgh: October 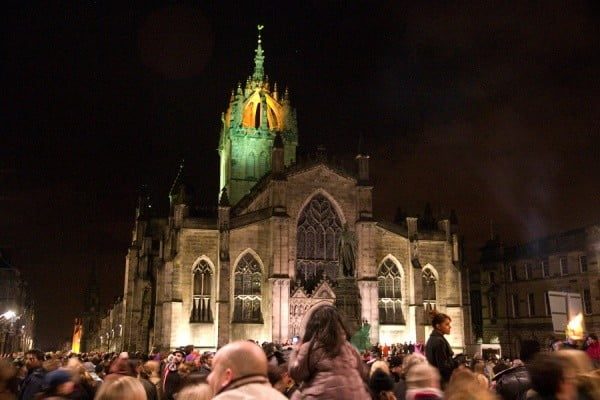 A German funfair modelled on that traditionally held in Munich, Oktoberfest is to be hosted over 10 days in a tent with a capacity for 1500, erected at the Red Square in West Princes Street Gardens. The festival celebrates Bavarian food, beer, and music, and is open from 4pm-11pm Wednesday to Friday each week, 12pm-5pm and 6pm-11pm both Saturdays, and 12.30pm-7.30pm each Sunday.

Admission is free each Wednesday, with a £5 entry fee on Thursdays, Fridays, and Sundays, and £10 on a Saturday. Entry on any day is included with a £34 (£39 for Saturdays) package for food, beer, and a seat reservation. Children are only admitted for the Sunday lunch. Early arrival is advised to avoid disappointment, as the venue is expected to reach capacity. Details on the different packages and extras available can be found here. You can also view video footage of the festivities and order Bavarian beer using the header links on the website.

This festival proffers a fortnight of food offers and events throughout Edinburgh’s great selection of restaurants, delis, markets, and cafes. It opens on the 8th of October at 7pm with ‘The Chef’s Table’, a gourmet evening at the Ghillie Dhu hosted by a quartet of Edinburgh’s best chefs, each of whom will prepare one of the 5 exquisite courses served to attendees (after an opening round of canapes; the full menu can be found here). The event costs £100 and includes matched beverages for each course; tickets can be purchased from the Ghillie Dhu (tel: 0131 247 4701; email: ghillieevents@g1group.com). This is Edinburgh are also running a prize draw for a meal for 2 and a bottle of Prosecco at the Gusto Restaurant and Bar in George Street – you can enter their competition here.

Other highlights include the producer taster parties to be thrown by our nearby friends, Cranachan & Crowdie; they’ll be showcasing Edinburgh Gin on the 9th, NB Gin and Trotter’s Independent Condiments on the 16th, and Pickering’s Gin and Dunkeld Smoked Salmon on the 23rd (5pm-7pm each day). The 18th of October will see a Great Gin Treasure Hunt, where participants will follow riddles and clues through city centre bars in search of a prize gin cocktail, leading finally to The Edinburgh Gin Distillery where one lucky ticket-holder will win the opportunity to make their own small batch of gin. The West End Beer Festival is to feature from 12pm the following day, where attendees can meet brewers and sample beers across different bars (full event information is still to be made available).

Details on all the offers that will feature for the festival are available by using the filters on this page.

Similar in concept to Tough Mudder (profiled in our early June entry), Men’s Health Survival of the Fittest is Britain’s most popular adventure running series, challenging contenders to run a minimum of 10km through an urban assault course established in the host city. The series is open to both teams and individual competitors, and once you’ve braved the obstacle zones devised by organizers Rat Race, you’ll be rewarded with a beer tent at the end of the course. This Scottish Survival event will be followed by 2 finales in London and Manchester on 2nd November.

The base, or Event Village, is to be located at West Princes Street Gardens; an outline of the rolling route and obstacles you’ll encounter is available to view on the event’s webpage. Friends and family are welcome to come and support you in this test of speed, endurance, and courage.

In keeping with the prior 2 years’ precedent of completely selling out, standard tickets have gone already, but Last Chance tickets are still available at the time of writing this blog. Ticket prices can be found here, while the FAQ is available here.

This annual alternative book fair is organized by Word Power Books, and will be hosted at Out of the Blue Drill Hall on Dalmeny Street from 6pm on the opening night. The fair has a niche emphasis and will see over 70 publishers promoting their books and events, as well as author talks, book launches, creative writing and school workshops, and film screenings. Admission to the festival is free, but donations are encouraged. Catering will be available at the on-site cafe and bar. A photographic exhibition, entitled ‘Shooting the Occupation: The Palestinian Villages of Popular Resistance’, will run alongside the main fair. The lineup of events is available to view here.

This year’s festival, entitled ‘Once Upon a Place’, celebrates how our past has been encapsulated in stories with a series of storytelling ceilidhs, talks, exhibitions, tours, and performances over 10 days. Topics for inclusion include Sir Walter Scott and Robert Louis Stevenson, visual imagination and landscapes, fantasy stories (including dreams and prophecies), national stories, and tales of World War I.

The focus on place will be manifest in exploring the ways in which people perceive stories in rural and urban landscapes across Scotland, Europe, and the Pacific, while the cosmopolitan Open Hearth sessions will invite stories from around the world. The festival’s closing weekend will mark Samhainn/Hallowe’en. Events will be held during daytimes and evenings in various venues throughout Edinburgh, and the festival will also cater for a younger audience, with one weekend assigned to nurturing the next generation of storytellers. Furthermore, anniversary celebrations for Edinburgh’s UNESCO City of Literature status (10th), and Sir Walter Scott’s debut novel, Waverley (200th), are to feature.

Festival Supporter Passes are available for £25, and include access to exclusive events and deals, including the launch party and discounts on events held at the Scottish Storytelling Centre. More information on the benefits can be found in the festival programme, or by emailing reception@scottishstorytellingcentre.com.

Edinburgh’s renowned Botanic Garden is to open its doors to visitors for night-time light shows from the end of October. The advent of this experience from the Garden, co-devised by Edinburgh firm Unique Events (organizers of Edinburgh’s Hogmanay), has arisen from collaboration with Scottish light artists Malcom Innes and Euan Winton, who’ll be transforming a kilometre-long trail through the venue and (literally) highlighting its prevailing features, such as the Victorian Palm House and Pond. There will also be some interactive installations which visitors can adjust to create their own spectacles. The combination of light and nature, including the stirrings of the Garden at night, is held to make for some impressive effects during the hour-long, family-friendly tour.

For further practical information and to secure an available timeslot, see the booking site, or call 0844 573 8455 from 10am to 6pm Monday to Saturday. Tickets are also available to purchase in person from the Festival Fringe Shop, 180 High Street, which is open from 10.30am-5.30pm Monday to Friday.

This event takes place on Edinburgh’s famous Royal Mile, the site of ancient markets, All Hallows fairs, and street performances, including the Galoshans play (based on the English folk legend, ‘St George and the Dragon’), from which this festival takes its structure. Last year’s had a spectatorship in excess of 6000, and the narrative illustrates the transmogrification of summer to winter through conflict between their respective kings.

Tickets aren’t needed for attendance, although donations will be expected. Full event information is to be uploaded to the festival’s webpage shortly.

Halloween (31 October) [events run before and after]

Halloween is a very popular occasion in Edinburgh, and as such, there are a wide and varied range of events planned, from walks and themed tours to parties, dances, and ceilidhs. Edinburgh Tourist have compiled a selection here, as well as a handy list of some Halloween customs for those less familiar with this festival. It’s worth noting that some of these events run long before and after the 31st; for example, ‘Halloween at The Dungeons’ begins on 10th October and ends on 2nd November, while ‘Close Fest at The Real Mary Kings Close’ begins on 31st October and continues until 6th November.

As usual, we’ll provide reminders and ongoing coverage of several of these events on our Facebook and Twitter channels, so follow our accounts to stay up to date. Finally, let us know what you’re planning to do in Edinburgh this October using the comments function, and stay tuned to this blog for future entries in the series and more besides.