Neighbouring the landmark Usher Hall and near a raft of other esteemed institutions, this impeccable first-floor apartment can cater for all your needs. 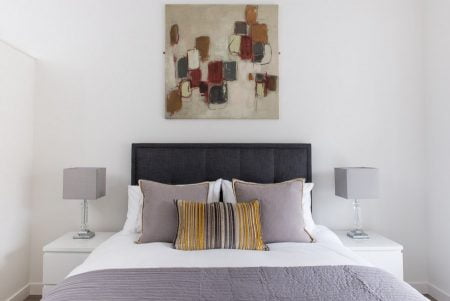 Situated on a distinguished main road off Princes Street and right next to the landmark Usher Hall with its adjoining Lyceum and Traverse theatres, this immaculate property is nevertheless very quiet owing to its secondary glazing. The Filmhouse Cinema is another esteemed institution visible from the apartment’s windows, while the Cameo is at the next junction. While Princes Street is but a minute’s walk away, Lothian Road has its own selection of specialist shops, as well as restaurants and a Co-operative supermarket. A taxi rank and hop-on hop-off City Sightseeing tour stop are located just outside the property; due to our partnership with Lothian Buses, we are able to offer guests a five percent discount on their tours and the Airlink bus service (between the airport and city centre) if you pre-book tickets here.

The apartment is on the first floor of a communal stairwell with classy wooden cabin-esque walls. The property itself features wooden flooring throughout, with the exception of the shower room on the immediate left which bears cream tiling beside the wet area. The beautifully minimalist décor and fresh neutral palette of white, slate and cream tones adorns the modern wet facilities, countertop and walls respectively. This is complemented by chrome fittings, including the added convenience of heated towel rails.

The master bedroom off the corner has windows looking out to the street and a 32-inch HD smart TV on a unit at the foot of the King-sized bed. Both this and the neighbouring double bedroom have ample storage in their fitted double wardrobes with mirrored sliding doors. The master’s contains an iron and a safe large enough for a laptop, while the second bedroom’s contains a clothes horse. Both rooms also have hair dryers.

The kitchen-cum-living area is the apartment’s largest space, with the snow-white units encapsulating a fridge-freezer, washing machine and dishwasher, paired with state-of-the-art cooking appliances such as the induction hob and raised microwave-oven. Beside this is a matching dining table seating four, set out from the sides of the room furnished with a leather sofa and opposing wingback armchairs. The windows on the two far sides look across and down the street, while the nearmost corner contains another HD smart TV (40-inch) atop a cabinet housing the router, a DVD player, and a selection of home décor magazines. The room’s twin centrepieces – a mounted patchwork bull head bust and a rocky halo on the windowsill – confer a sense of balance to the space, while the former also adds an iconic Scottish touch in its use of our national textile, tartan.

Lothian Road is at the boundary between the Old Town, the New Town, and the West End, and so presents a rare opportunity to enjoy all of Edinburgh’s central areas with the minimum of effort. Added to this is the host street’s own recreational offering and the retail haven of Princes Street immediately beyond, which together with this premium property makes for a showcase of Edinburgh at its very best.

My location
Get Directions