Grand in scale and facilities, Ramsay Garden is also enviably located beside Edinburgh Castle and offers views over the New Town. 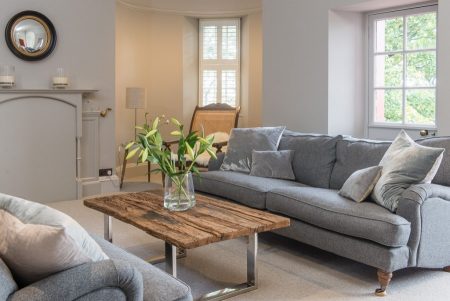 Ramsay Garden is a desirable block of 16 apartment buildings situated on Castlehill and overlooking Edinburgh’s New Town. Part of the city’s World Heritage Site, Ramsay Garden takes its name from its inaugural resident, Alan Ramsay, who in 1740 built Ramsay Lodge, now part of the modern development commissioned by urban planner Patrick Geddes. Both Edinburgh Castle and Camera Obscura are literally around the corner, the first in a series of famous attractions spanning the length of the Royal Mile, including the Scotch Whisky Experience, St Giles’ Cathedral, and a number of great shops and restaurants such as the Witchery and Cranachan & Crowdie.

The apartment is selectively furnished and decorated throughout, conferring a stylish spaciousness which is immediately evident upon entering through the small vestibule to the hall topped with waterfall chandelier. The hall is the nexus for the apartment’s rooms, beginning with the lounge on the right, which has a leather sofa, plush armchair and glass coffee table.

Next along is the first of the apartment’s bedrooms, with a window looking out to the New Town and Fife beyond. This room contains a kingsize bed, fitted double wardrobe and wooden armchair. The neighbouring master bedroom is similar in style, but features a super-kingsize four-poster bed, flatscreen TV with integrated DVD player atop a chest of drawers, double wardrobe, double cabinet, and teardrop chandelier.

Off the farthermost left end of the hall is the living room, which has bay windows looking out to the bustling Princes Street and North Bridge. Here the profusion of the garden’s greenery is apparent, conveying the complementary sense of country living underlined by the rustic coffee table between the room’s two sofas, and so the apartment combines the best of both worlds. On opposing sides of the room are an antique Chinese double cabinet and a wall-mounted 4K Ultra HD Smart TV with Sonos speaker system, itself adjacent to the room’s wooden armchair, although the TV’s hinge allows for optimal viewing regardless of position. A small balcony adjoins the living room, offering clearer views of the garden and New Town. On the opposite side are folding doors leading on to the dining room, which also has bay windows and a matching Chinese double cabinet, as well as a dining table seating eight and an engraved oriental fireplace.

Directly off the left of the main hall is another bedroom with kingsize bed, an armchair, and double wardrobes on either side of a curtained cabinet. In the rightmost of these, you’ll find the apartment’s boiler; the heating is controlled via a panel in the lobby branching off the back of the main hall. This lobby also contains a utility closet with iron and ironing board, and the bathroom, which has a freestanding roll top bath with decorative claw feet and an attached shower head. Both the bathroom and the nearby shower room with wet area have heated towel rails and electric underfloor heating, affording an additional source of homely comfort on chilly days. The fourth of the apartment’s bedrooms (again with a kingsize bed) is to be found beside the shower room, and houses a dressing screen and integrated triple wardrobe.

The final room of the apartment is its kitchen, which has the facilities for two to cook simultaneously in its ample worktop, dual elevated ovens, gas cooking range and twin sinks. There is an equal abundance of storage space, with the central unit sporting drawers on three sides, and cupboards running from the door along to the Samsung fridge-freezer. The kitchen also contains a dishwasher and washing machine.

Ramsay Garden offers the opportunity to experience Edinburgh from a vantage point shared with Edinburgh Castle. The recurrence of Castlehill in postcards of Edinburgh attests to its status as an iconic city landmark, and one which supplies views the equal of those in which it stars. Additionally, you’ll stay in an apartment whose remarkable dimensions are capitalized with tasteful and pristine décor, as well as high-end fittings and facilities. In all then, Ramsay Garden qualifies as a great foundation for your stay in the capital of Scotland.

My location
Get Directions