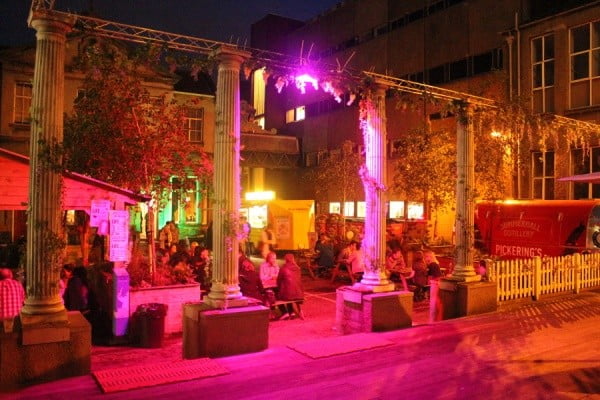 Who? A host of magicians, some friendly staff, and punters (including me; and how about you?).

What? Edinburgh International Magic Festival, which brings performers and audiences together to explore the art of amazement and astonishment.

When? Until this Saturday, fourth July.

Where? Various venues; primarily Summerhall, made over as Magic Village.

The obligatory why? Because magic!

Last weekend, I attended the Opening Night Party of Edinburgh International Magic Festival as a guest blogger. This was a well-devised event offering a preview of the magicians who stage full-fledged shows over the duration of the wider festival.

Arriving at Summerhall, a mainstay of Edinburgh’s arts scene, you’ll find the venue enchantingly decorated as the festival’s Magic Village. Summerhall’s school conception is apparent as you navigate its stairs and corridors, but the affable festival staff are always on hand to point you in the direction of a show and to manage the queues. 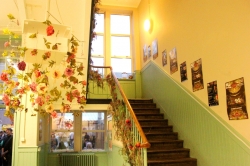 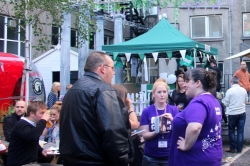 The venue’s courtyard is the locus at which to relax between shows, as well as indulge in some La Favorita pizza or Krispy Kreme doughnuts. The courtyard also has an interactive installation, “Sweet Dreams”, a flower bed which changes colour as you circle it. Additionally, Tam Shepherd’s Magic Shop offers tools of the trade to those inspired to practice magic themselves.

The Opening Night Party’s shows were diverse in style, but all the magicians had a comedic touch and were adept at establishing camaraderie with their audiences. Ali Cook set an impressive precedent in “The Art of Astonishment”, making his assistants vanish and reappear in the blink of an eye before seemingly impaling one with flaming rods, only to have her emerge from entrapment unharmed, and with company to boot.

Dr Houstoun’s “Conjuring” was a more understated affair, but no less impressive for that. Houstoun brought Summerhall back to its academic roots when he interspersed lecturing on his Victorian heroes, the forefathers of modern magic, with the spellbinding multiplication and disappearance of coins, demonstrating why he’s Magic Circle’s current Close-up Magician of the Year.

Colin Cloud’s “Kills” was much more congenial than the title suggests (although he did say his preview wasn’t representative of his full shows, so don’t hold me to that). It was the most interactive performance of the evening (involving the entire audience at times) in which Cloud displayed feats of interpretation to deduce the characteristics of selected guests. I must admit that I’m a skeptic and remain one still, although Cloud’s wit and engaging personality kept me entertained throughout.

Mark Elsdon adopted a uniquely intimate format for his show, dubbed “10”, in which he performs 10 tricks for an audience of 10 in 10 minutes, saying only 10 words per trick. It augments the power of close-up magic, and his was another display of prestidigitation, involving coins, elastic bands, and a spoon which became a fork in his mouth. For his finale, Elsdon requested a ten-pound note from our group. He proceeded to sign and puncture it through the middle with a pen, to the dismay of its owner. But Elsdon fulfilled his mantra, ‘astonishment is real’, when he drew the pen right through the note…leaving it intact.

Luke Eaton’s “The Late Night Horror Magic Show” was another which didn’t quite tally with its title; if like me you’d expect blood and gore, you will be surprised (or relieved) that the premise was for Eaton to have a nail hammered up his nose courtesy of an audience member (he admitted a tendency to target attractive young women, so the squeamish among you had better duck). Eaton described his show’s appeal as akin to picking a scab; repellent and yet satisfying. If you like watching people victimize themselves, then this will be right up your alley, and if not, then you can revel in schadenfreude at the poor person who has to force that intimidating length of nail up his nostril.

There were several shows I didn’t manage to see at the party, but before leaving, I also got a glimpse of Trendy Wendy’s DJ set, sensibly positioned in the upstairs Dissection Room so as not to disrupt the sedate (though by no means sensible) proceedings below. 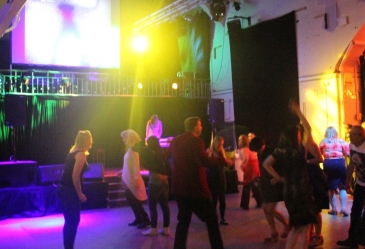 The Opening Night Party got the festival off to a promising start and if you’re interested in seeing some live magic, check EIMF’s website for the full package from some of the skilled illusionists mentioned above.